More than anyone needs to know about word-break colon break-word.

I just learned a whole bunch of stuff about CSS3 Text and word-breaks and word-wraps and hyphens (but not run-on sentences?).

Bug 959735 tells the tale of truncated yet non-hyphenated text on wired.com’s mobile site in Firefox browsers. Like so (Firefox left, Chrome right): 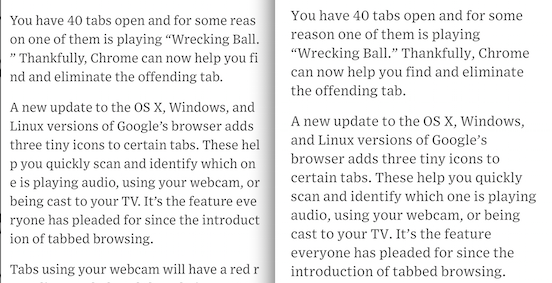 The offending CSS is here:

So why aren’t there any hyphens appearing in Firefox, which supports CSS hyphens? I binged some things and lots of example code on the web looks pretty darn similar to what wired.com has. It turns out hyphens: auto here won’t actually do what the authors intended.

After reading some specs and stackoverflows I learned that word-break: break-all is really intended for predominantly CJK scripts (from what I gather), where breaking up a “word” (grapheme cluster?) isn’t such a big deal, and word-wrap: break-word really is for non-CJK scripts.

OK, cool. But what the heck is word-break: break-word? It’s not in the CSS3 Text spec, the only valid values for word-break are normal, keep-all, and break-all.

This comment from WebKit’s RenderStyleConstants.h suggests that it was added by WebKit (which Blink inherited) for IE compatibility.

So let’s go back to the bug.

Even though Chrome doesn’t support CSS hyphens, it understands word-break: break-word and treats it like word-wrap: break-word. Safari does the same, but it actually supports CSS hyphens so it looks a little nicer. Safari also appears to add hyphens to non-CJK text when using word-break: break-all (even without hyphens: auto). You can check out this test page I made if you’re curious.

From what I can tell, IE7 (and below?) treated word-break: break-word as a synonym to word-wrap: break-word (or at least it did the same thing). At some point WebKit needed that for compat, so they added it. Note that IE8 and above (if you can trust IE11 in that version’s document mode) doesn’t do anything with word-break: break-word. See this screenshot from the bug.

Now the 64 bitcoin question is, “is word-break: break-word important for web compatibility today?” It seems like wired.com is relying on that behavior (on accident, I think), but we’ll do our best to ask them to remove it (and remove word-break: break-all too—they already have word-wrap: break-word on body, which is all they need).