How to delete your jQuery Reject Plugin in 1 easy step.

In my last post on testing Chrome version 100, I encouraged everyone to flip on that flag and report bugs. It’s with a heavy heart that I announce that Ian Kilpatrick did so, and found a bug.

The predictable bug is that parks.smcgov.org will tell you your browser is out of date, and recommend that you upgrade it via a modal straight out of the year 2009. 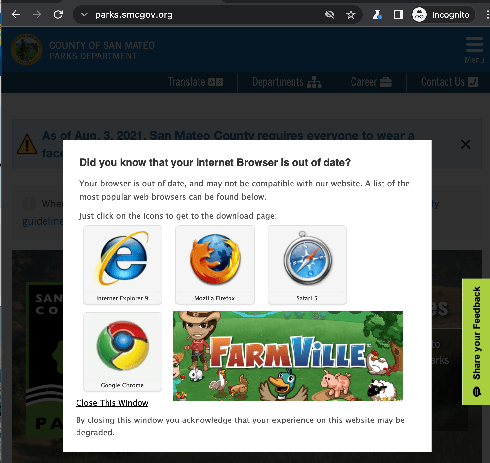 (Full Disclosure: I added the FarmVille bit so you can get back into a 2009 headspace, don’t sue me Zynga).

The bug is as follows:

Back when this was written, a version 100 was unfathomable (or more likely, the original authors were looking forward to the chaos of a world already dealing with the early effects of climate change, and now we have to deal with this?, a mere 11 years later) so the minorStart offset approach was perhaps reasonable.

There’s a few possible fixes here, as I see it:

I. Kick the can down the road a bit more:

I don’t really plan on being alive when Chrome 999 comes out, so.

II. Kick the can down the road like, way further:

According to jakobkummerow, this should work until browsers hit version 9007199254740991 (aka Number.MAX_SAFE_INTEGER in JS).

Also, if you happen to work on any of the following 1936 sites using this script, you know what to do (pick option Roman numeral 3, just to be super clear).